PWAs (Progressive Web Apps) have been around for quite some time now. With time the PWA developer ecosystem and browser support has become mature and most of the top web platforms are now starting to add PWA support to their web apps. So what exactly is a PWA?

MDN's under construction PWA page defines a PWA as

If this definition is too vague or broad for you, you can safely assume that PWAs are web apps which run in the browser but can be "installed" on the user's smartphone or computer to provide a native app like behavior but in the browser. Generally, some offline functionality or graceful application behavior without network connectivity is expected from PWAs.

To better understand how PWAs are implemented and what better experience this web application design pattern provides, let's try to dig into and reverse engineer the Twitter PWA using the Chrome Dev Tools.

If your web app is going to be "installed" it needs to have some metadata, e.g the app's name, icons for different resolutions and a url to which the app opens to by default. All of this information is added in a json file present at the /manifest.json path.

Here is a screenshot of the Twitter's manifest.json file. 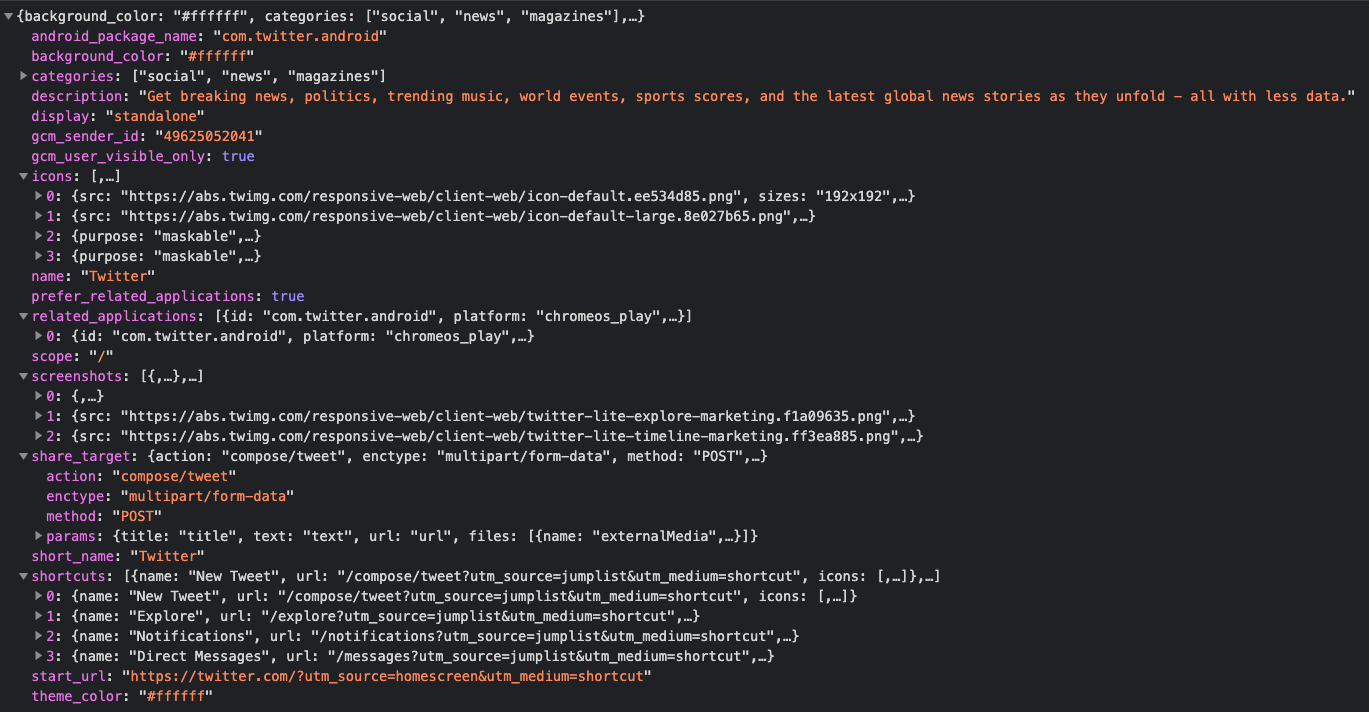 You can see the detail you can provide and the support for the possible interoperability of the Twitter Android native and the PWA app using the android_package_name property. Pretty powerful and feature rich! Read more about the manifest file and what it can support here.

The ❤️ of PWA - service worker is a JS script that lives separate from the browser page. Among other features, it provides a network proxy for the web page it is running for. This means every network request originating from that page passes through the service worker. This opens up possibilities and provides more control over resource caching, offline application behavior and requests for resources or API calls that are sent to the server. 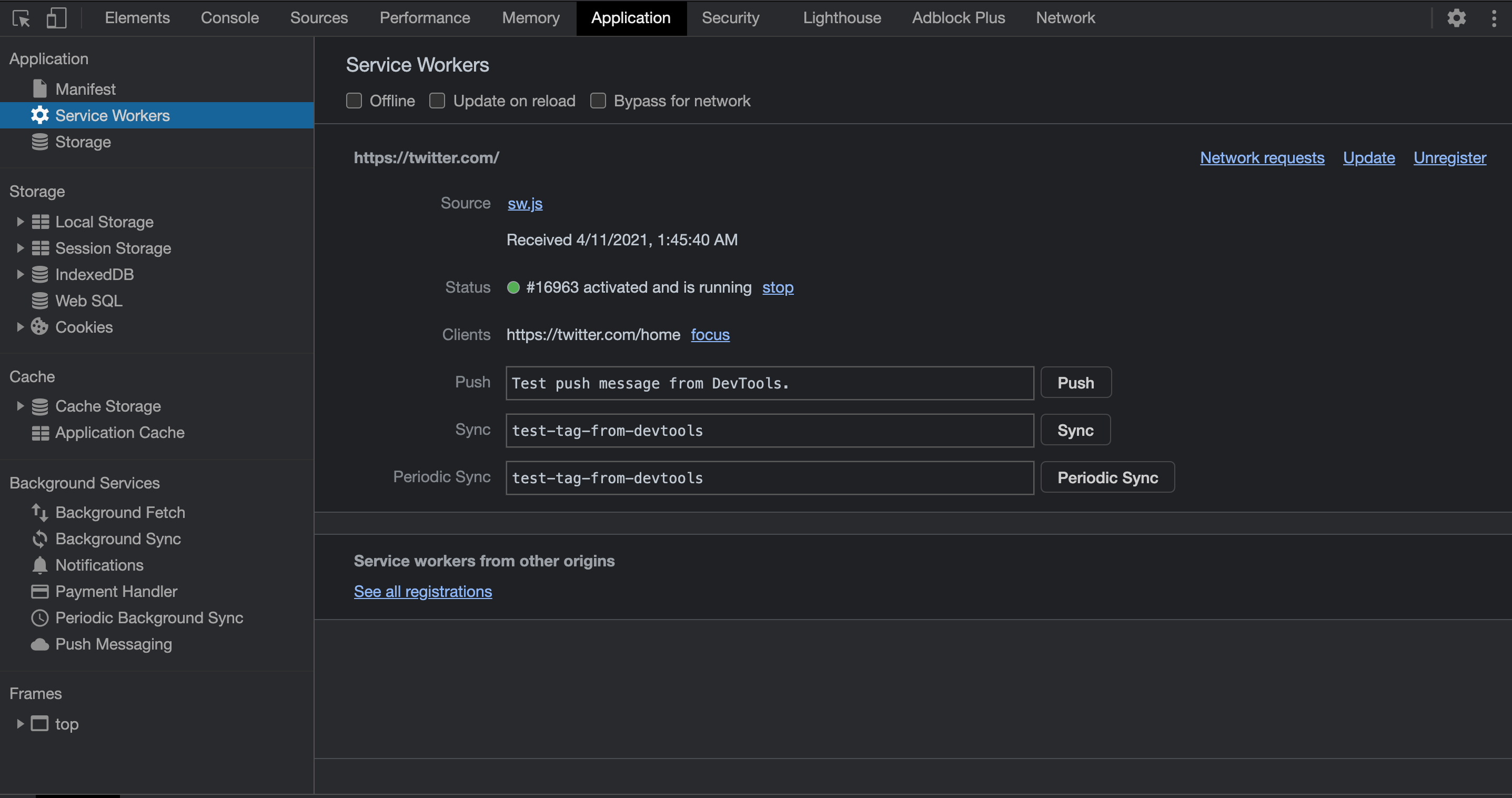 The Cache Storage Web API provides a simple way to implement caching of resources in the browser. It is important not to confuse this API with the default browser caching implemented by default. 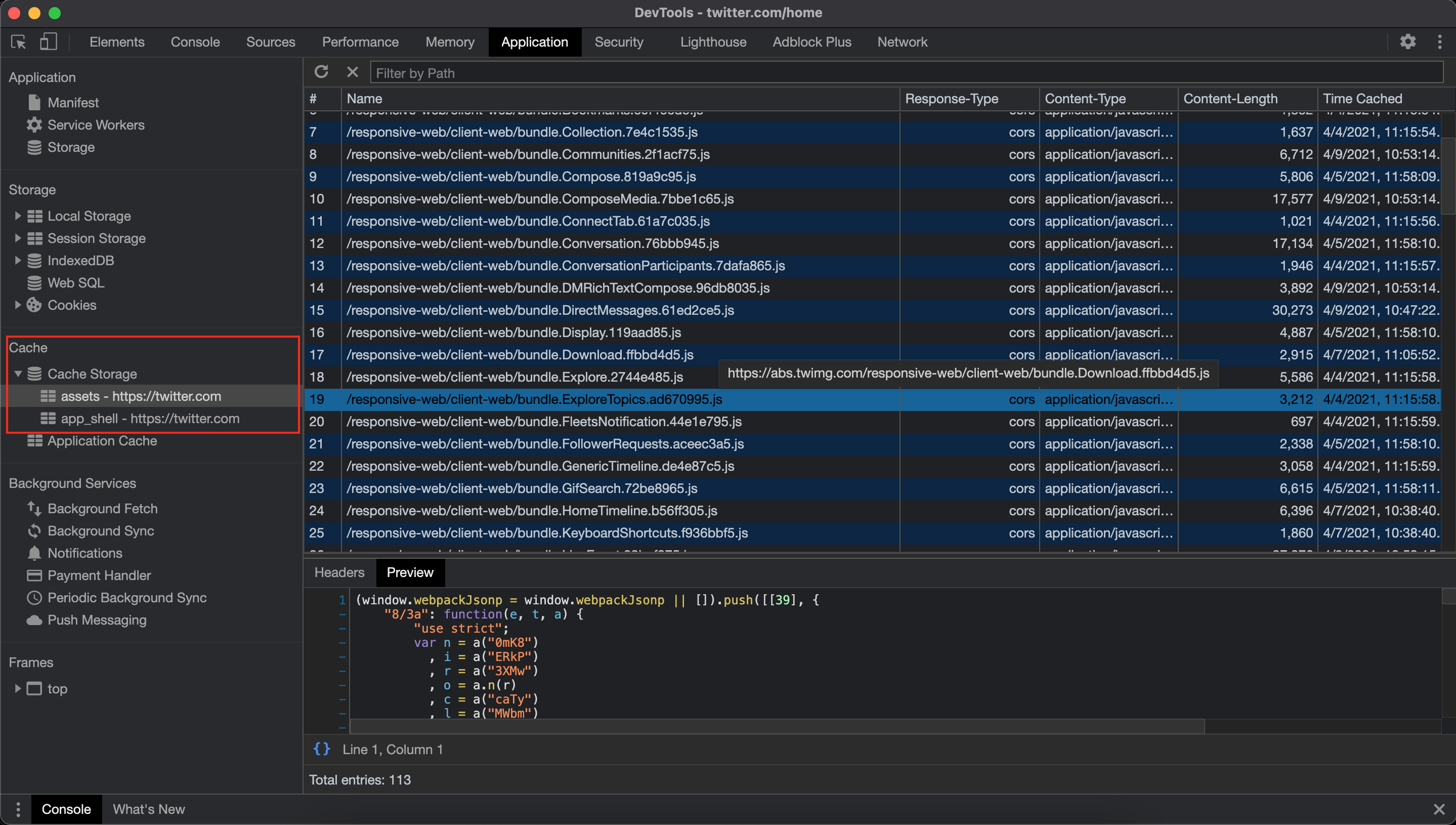 As you can see there is a list of js files stored in the cache storage and each one of them has a path in the name field. Remember when we said that the service worker acts as a network proxy for the page. This means every request for these js resources originating from twitter.com first passes through the service worker.

The service worker is implemented in such a way that for every resource request it first checks if the resource is present in the cache storage. If it is, the page is sent a 200 OK response along with the required resource, without ever hitting the twitter.com servers. You can see a live demo of it in the Network console. 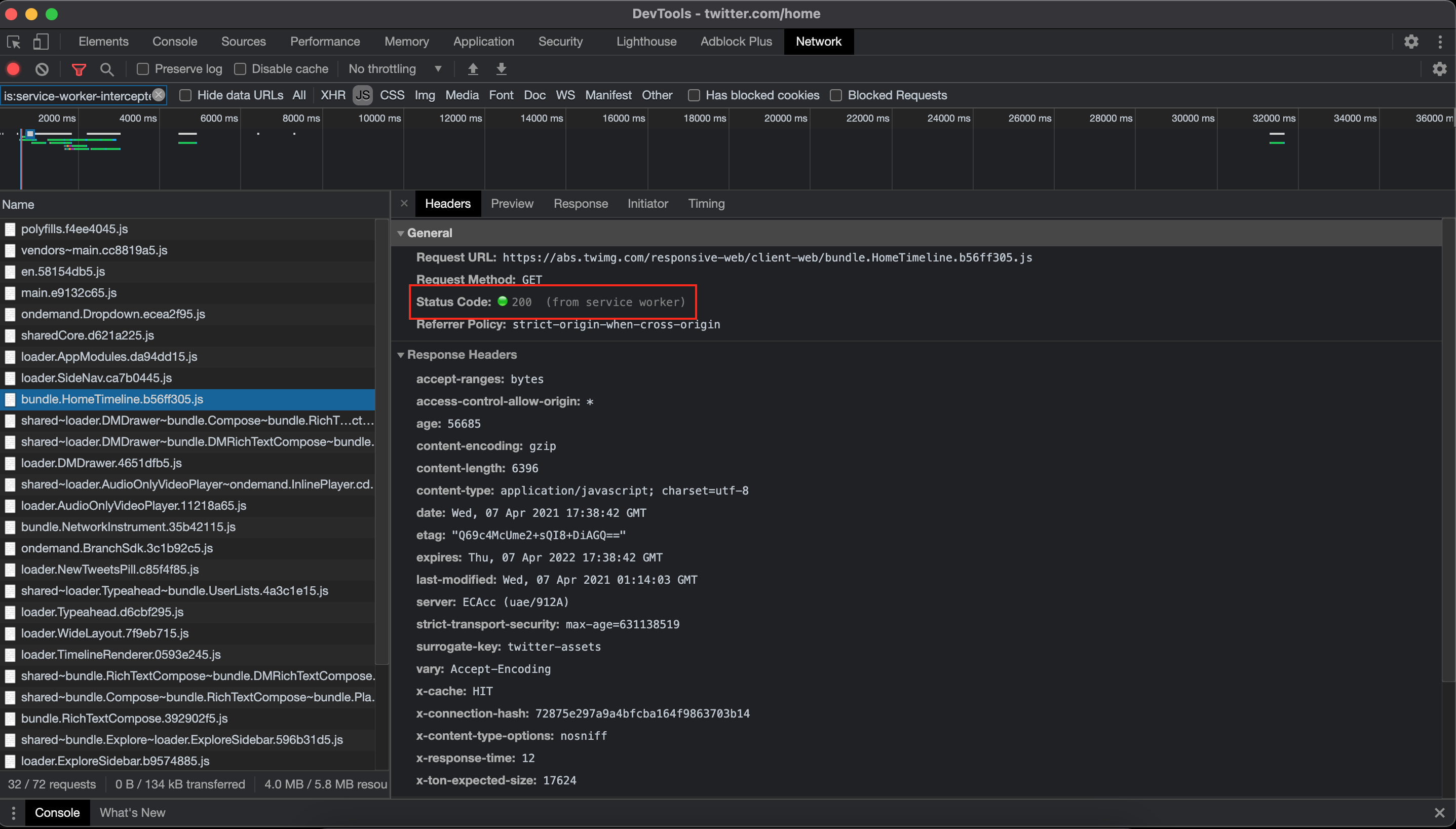 As you can see in this screenshot, for the js resource bundle.HomeTimeline...js the request never hits the servers and the twitter.com page still gets the 200 OK response along with the script.

Similarly, the HTML skeleton/shell of the Twitter app is also cached.

Another one of the emerging web browser API that PWAs use is the IndexedDB API. The IndexedDB is an interface for storing and accessing structured data within the browser.

Twitter makes interesting use of this feature for optimizing user experience by storing different kinds of less frequently changing metadata for the logged in user and some recent user activity so that it can be fetched directly from within the browser when needed. 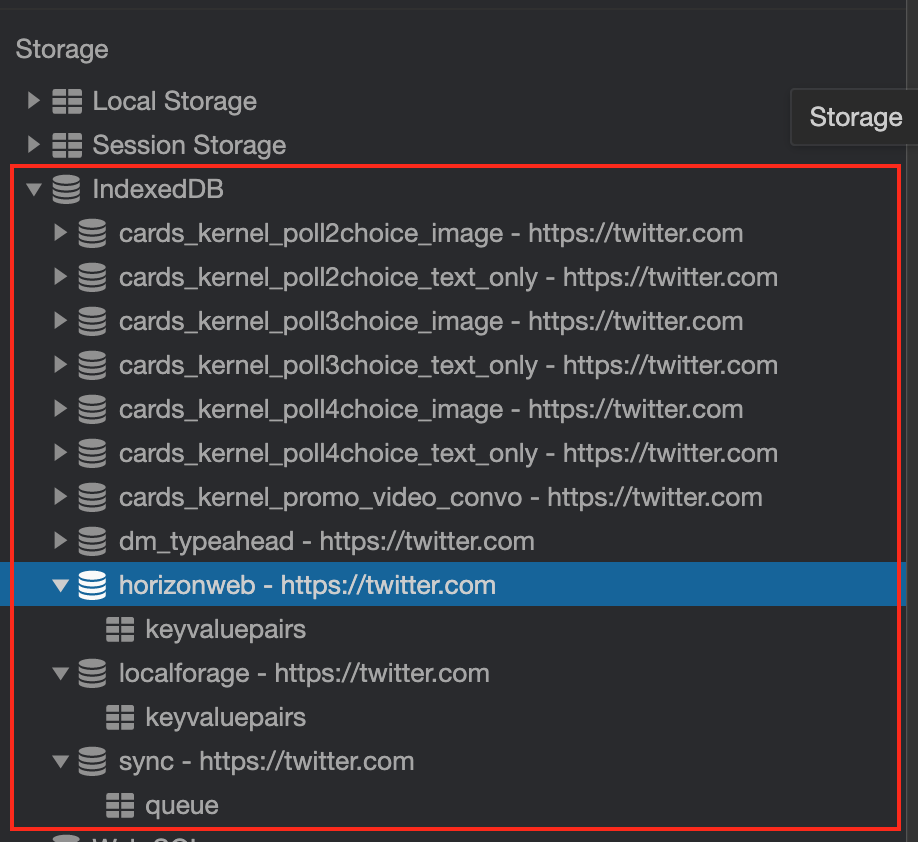 A quick look under the IndexedDB category for twitter.com shows multiple IndexedDB instances, some with only a single Object store, some with multiple. 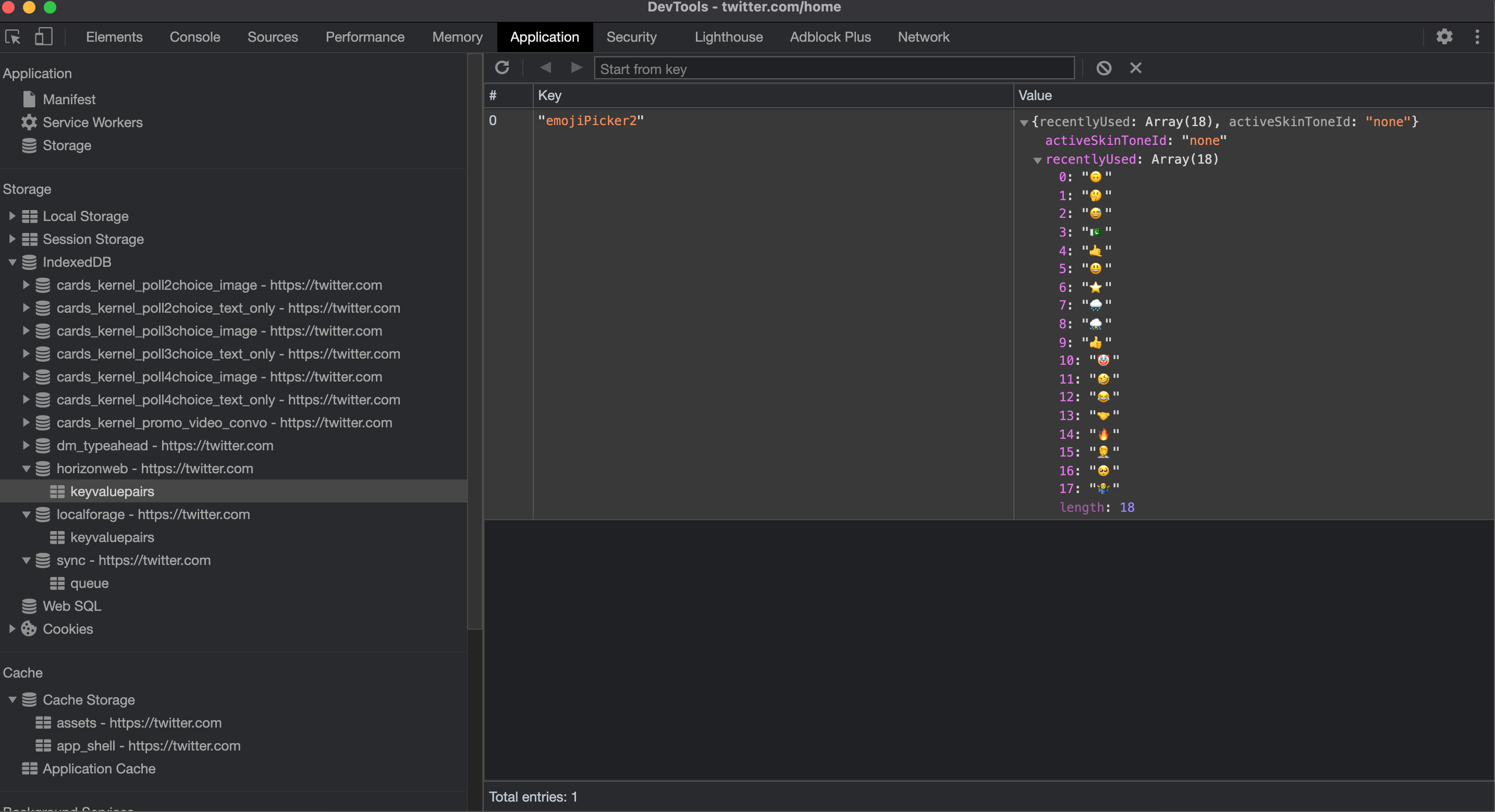 Expanding in and looking at the contents of one of the DBs with an object store called keyvaluepairs we can see that it has stored a list of my recently used emojis on Twitter. 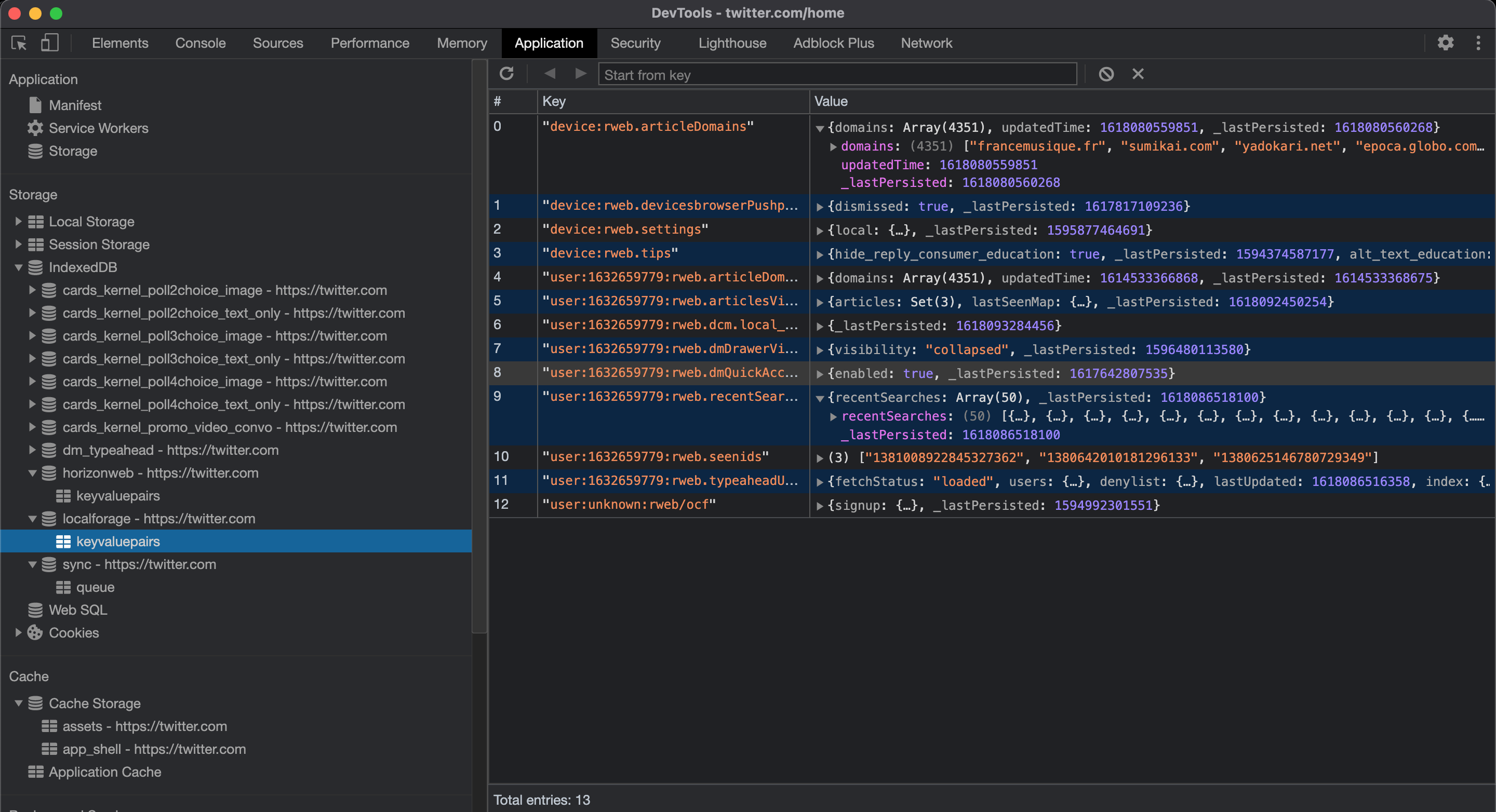 The Object store in the DB with the identifier localforge contains some more metadata about the user.

This kind of data could have been stored using good old Local Storage but newer features like IndexedDB are meant to server as an objectstore database for your application right within the browser.

You can use a little button in the Chrome browser URL field to install the PWA as an app. 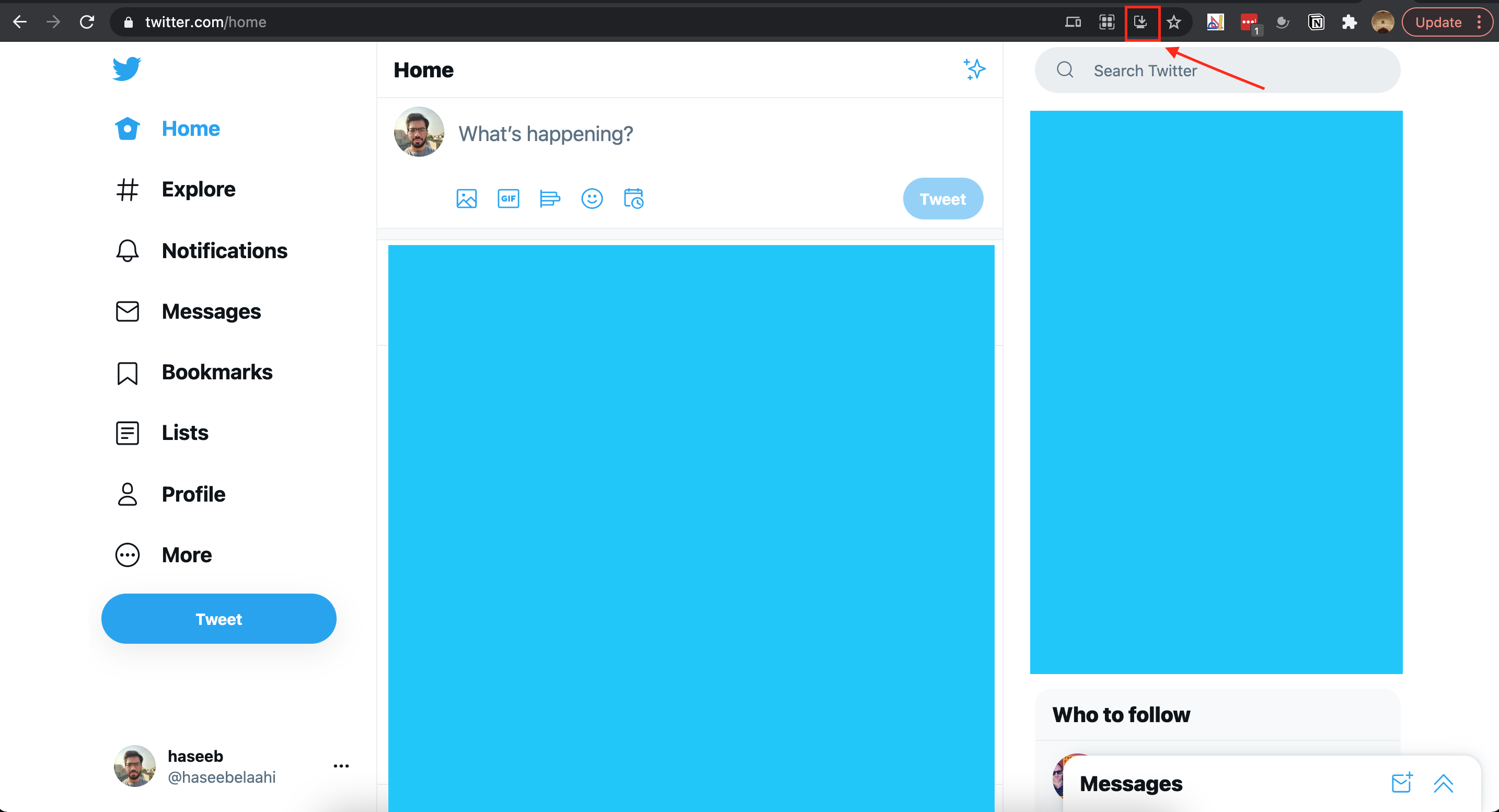 Once installed, you now have a Twitter app icon in your dock/task bar and the app opens in a separate window different from your browser. 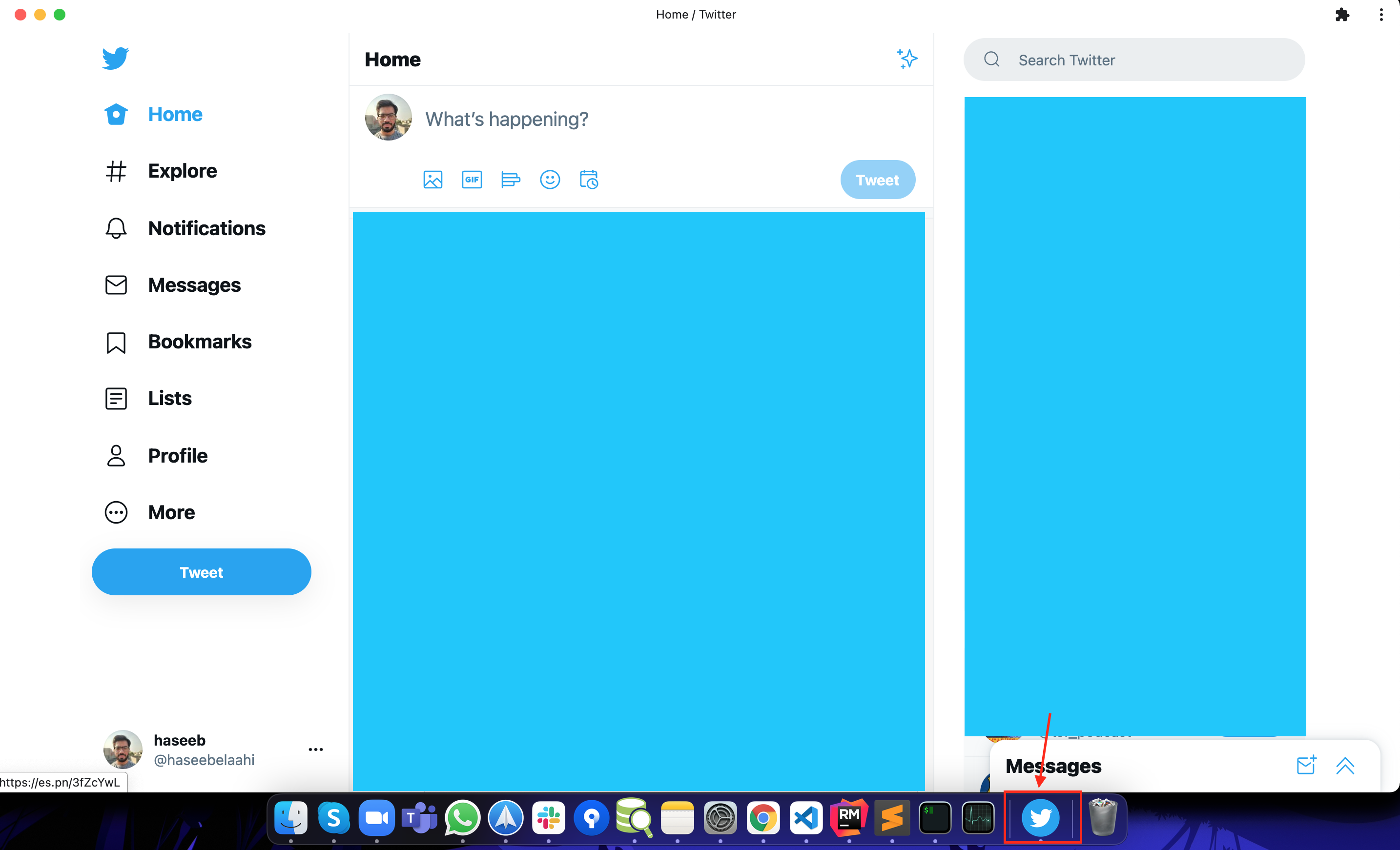 Let's see what happens if I turn off my network and try opening the newly installed Twitter PWA.

As you can see, the app's UI gets loaded. Most of the navigations work, but no tweets or trends data is loaded. It is important to understand:

Phew you reached the end! Hopefully, you learned something new. If you want to ask a question, leave your thoughts about PWAs or you think there's a mistake in the article above, I'll be glad to hear from you in the comments below. You can also reach out to me on Twitter @haseebelaahi 🙂